MineDraft Showdown ft. Minecraft is a Minecraft PvP tournament series organized by Twitch and Pikaclicks. It is a team deathmatch tournament with many Minecraft content creators and streamers divided into 8 teams. As part of Twitch Rivals, participants are required to stream their points of view as they fight other players in a PvP-enabled arena.

Multiple prominent Minecraft PvP content creators/streamers are formally invited, and eight of them will be designated as team captains for a total of eight teams. Team captains choose their members in a snake style draft on the day of the competition.

There are two prize pools for the tournament. The first prize pool depends on the number of wins and losses that the team accumulates over the course of the Group Stage. The second prize pool is determined by the rank of the team in the Playoffs and the bracket they’re in. The prizes are also granted on a per-player basis, and vary across the past MineDraft Showdown events. 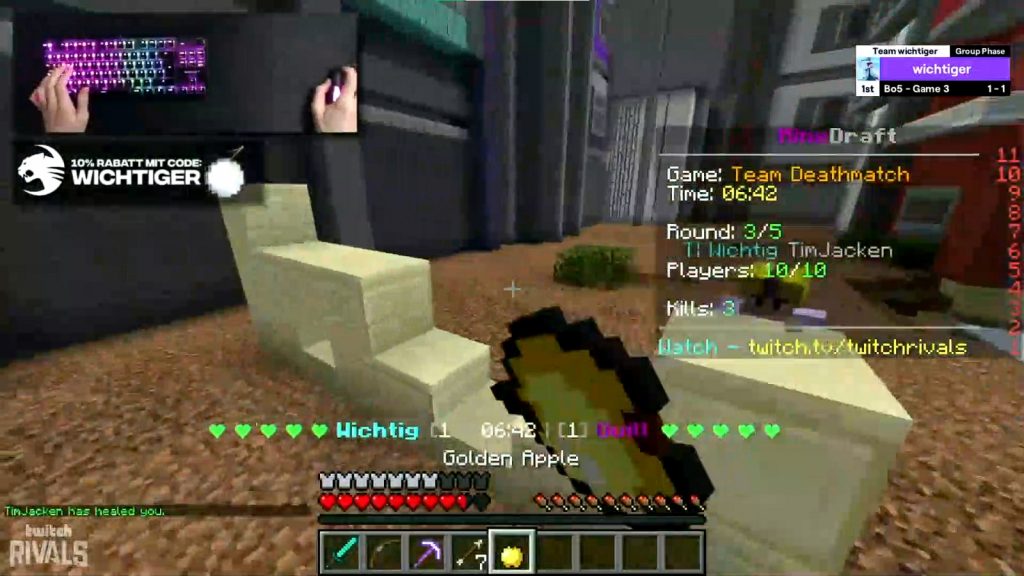 wichtiger’s point of view during Team wichtiger vs. Team TheGuill84 (from Twitch Rivals)

The game mode for the tournament is a team deathmatch in a best-of-five series. Each player can choose from four loadouts or kits (Swordsman, Archer, Healer, Flamemaster) that progressively get stronger as the tournament goes on.

At the start of the battle, PvP is enabled and each team is spawned at the opposite sides of the arena. Each team will attempt to eliminate all players in the opposing team within 7 and a half minutes. The team who has members remaining will win the match.

If both teams have members remaining when the time runs out, tiebreakers will be checked in this order: most players alive, time to first kill, total damage dealt, time to first damage.

There are four kits that players can choose from when the game starts.

All kits progressively get stronger each round, with their gear getting better every round and enchantment levels getting higher. All kits are also furnished with at least 2 golden apples, 16 building blocks, and a flint & steel.

If neither team has dealt damage to the opposing team for the first five minutes of the game, a Block of Gold will spawn in the game. Any team can take this Block of Gold, and if no damage is dealt until the end of the time duration, the team who possesses the Block of Gold will win.

However, since the spawning of the Block of Gold encourages fighting to get it, this specific win condition has never come into play for the entire tournament.

The first MineDraft Showdown tournament is a series of local tournaments across four regions: DACH, UK, France, and Spain. The dates of the local series were as follows:

These are the teams that competed in the Finals, listed in order of their group ranks:

Team aypierre won the Championship Bracket, with a total game prize of $8,650. The members include:

The Consolation Bracket was won by Team ReventXz, with a total game prize of $3,450. The members include:

The NA MineDraft Showdown tournament took place on May 27, 2021. A total of 56 Minecraft players were invited to the tournament, then divided into 8 teams of 7 members.

The teams of the tournament that competed in the Showdown were as follows, in order of their group ranks:

Team fruitberries won the Championship Bracket, with a total prize of $8,680. The members include:

Team scotteh won the Consolation Bracket, with a total game prize of $3,640. The members include: